Sarah Porter came from an illustrious and learned Farmington family. Her father was the minister of the Congregational Church for 60 years, and one of her brothers was the president of Yale University. She received the most advanced education available to a young woman of her time, including tutoring by Yale professors. A life-long scholar, she not only mastered four languages, but taught herself Hebrew when she was in her 80s. 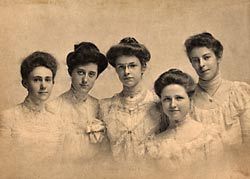 In 1843, she founded Miss Porter's School in Farmington, Conn. The school, which had only 18 students its first year, grew with the support of a progressive group of Farmington fathers who wanted their daughters to be educated in the liberal arts. By the 1880s, Miss Porter’s School had risen to national prominence and boasted nearly 100 young women as students.

Sarah Porter emphasized traditional values and the importance of educating women. She recognized the value and importance of service to others, and believed that women must be prepared to shape the future by educating their own families and running their households. As such, she made certain that the school was welcoming and homelike.


However, there was nothing traditional about the educational opportunities she offered young women. In the 19th century, her curriculum included Latin, French and German, spelling, reading, arithmetic, trigonometry, history and geography, as well as chemistry, physiology, botany, geology and astronomy. Each student was expected to design her course selection to meet her individual needs and talents. 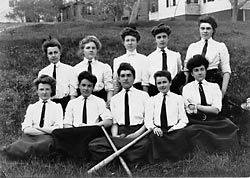 To ensure that her students were well-rounded, Miss Porter emphasized excellence in the arts as well as in more traditional academic subjects, a tradition that continues today. She also required her students to exercise regularly—a notable idea for the time. She encouraged participation in sports such as tennis and horseback riding. In 1867, the school even formed one of the first women’s baseball teams, called the Tunxises.

After Sarah Porter's death in 1900, management of the school remained in the hands of her nephew’s family. Robert Porter Keep, his wife, Elizabeth Hale Keep, and their son Robert Porter Keep Jr. ran the school from 1904 until 1943, when Miss Porter's School was incorporated as a non-profit institution.

Today, Miss Porter's School continues Sarah Porter’s mission of educating young women to shape the world in which they live. By providing students access to an excellent academic program, a premier arts curriculum, an array of high caliber sports teams, and community service, our graduates are prepared to become the local and global leaders of the future. Yet, Porter's remains a place where girls are supported by a close-knit community of students and faculty. For Porter’s students, Farmington is home.